Active Trails Whitehorse Association (ATWA)
The Magnusson Ski Trails Winter Grooming Project:
Update: April, 2016
The Magnusson Ski Trail Project Survey has been completed and the Contagious Mountain Bike Club will continue grooming the trails for fat biking in the winter. ATWA did not make a written submission as we felt it was an individual concern. However, we were certainly concerned with the process. WTGC Minutes suggest that two opposed the grooming. However, we do know that those individual submissions pointed out the impact that grooming for snow biking had on skiers, and suggested possible means to mitigate the impact.

Surveys obtain information surrounding a certain topic, in part to determine what concerns the public may have with regard to the subject. Efforts are usually taken to mitigate some of the expressed concerns. We were expecting some discussion at the WTGC that would address some of the issues raised in the two submissions. However, it does not appear that any took place. (See WTGC April and May Minutes of 2016 available at http://www.city.whitehorse.yk.ca/departments/parks-and-community-development/trails-/trails-and-greenways-committee). No indication was given as to what trails within the Magnusson Ski Trail system will be groomed for snow biking even though the project was to look at specific trails within the system that would best facilitate snow biking. Unfortunately, it is possible that some skiers will be displaced due to the lack of attention to some of the issues raised.

Background Information:
(The Magnusson Ski Trails are located on the East side of the Yukon River and are within Chadburn Lake Regional Park.)

The Magnusson Ski Trails Winter Grooming Project was on the Oct 22, 2015 agenda of the Whitehorse Trail & Greenways Committee (item 6 in their minutes http://whitehorse.ca/home/showdocument?id=5836). The Committee is seeking feedback from users on whether to proceed with this proposed grooming project. You can email your comments to: Douglas.Hnatiuk@whitehorse.ca

In 2014 The City’s Parks and Community Development department began considering a pilot project to groom the Magnusson Ski Trails to accommodate snow bikers beside skiers and other winter users.

In our view several of the trails envisioned for packing are too narrow to accommodate skiers and snow bikers side by side. If this packing idea is to work it must not result in the displacement of skiers who have used the area for decades. Our understanding of this proposal is that a part of every packed trail on the Magnusson ski network will be left "unpacked" and wide enough to allow a skier to make his/her own track. Otherwise, skiers will be force to ski only on the packed part of the trail. Only a skate skier would do that. In any case, the Magnusson Ski Trails are not designed to accommodate skate skiers.  It has always been nice to have ski trails that are close to town, but not packed or tracked so that one can experience "outback" skiing on a relatively safe route without going far from their home.

We understand that no trees will be cut to widen the existing trails in the system in order to accommodate the tracking machine and/or to widen the trail to provide additional room.  To do so would change the nature of the existing system and would greatly encourage the use of the area by ORVs.

​Little if anything was done in 2014 as snow conditions were not conducive. Some packing was done during the 2014/15 season, although #3 of the resolution below was not carried out (see #'s 1-3 below). We have been assured that public feedback will be sought to determine if the "project" is feasible or desirable by the users.

We encourage all users of the trails to contact city administration to express their views on the "packing" project and the use of some of the Magnusson Ski Trails by snow bikers. You can send your comments to Douglas.Hnatiuk@whitehorse.ca

ATWA would also like to hear from skiers concerning their experience with these trails, both before and after the proposed grooming takes place.   Contact us at activetwa@gmail.com.

February 7, 2014 Public meeting on the Magnusson [Ski] Trails - The group resolved as follows:

1. The Contagious Mountain Bike Club will rally its volunteers and "renovate" (or till) all Magnusson ski trails as soon as is practicable to make conditions safer and create a level playing field for the pilot project to be evaluated.

2. CMBC groomers will evaluate route options for grooming and forward a specific route recommendation to the City, who will in turn forward to this list for comment. In theory, CMBC will groom one loop, and leave another ungroomed (with exception of #1). They may even try a few variations of grooming treatment within the maintained loop to inform #3.

3. City will undertake to get feedback on Magnusson users' preferences and comments about the pilot project. We'll erect signage informing users about what is happening and why, as well as find a mechanism to advise people of when grooming is in progress. At the end of the winter, we'll review the results and report back to this group as well as the Whitehorse Trails and Greenways Committee for next steps. 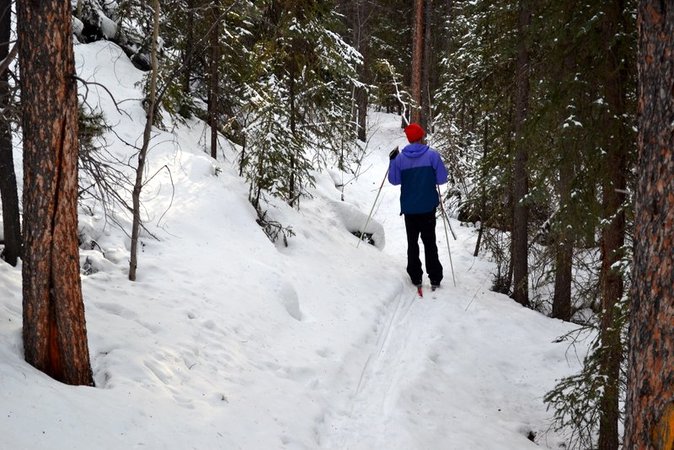