At a June 24, 2018 City Council meeting, Council approved the designation of the Whistle Bend perimeter trail as Non-motorized year-round, and the Snowmobile Bylaw's list of prohibited areas to be amended accordingly.

However, Council approved the designation of the Casca Inner Loop sidewalk as Motorized multi-use, although the survey results indicated a majority of residents in favor of a non-motorized designation for both trails. 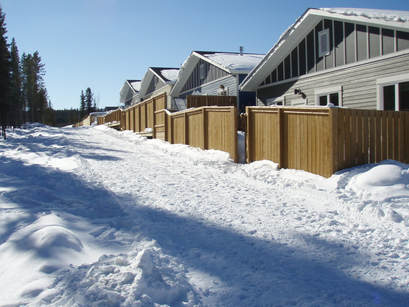 The Whistle Bend paved perimetre trail (seen at right) is located close to houses for over one kilometre.  New homes are still being built next to it.  This trail is extremely popular with pedestrians.

​Active Trail Whitehorse Association believes that this trail is not suitable for any kind of motorized use (snowmobiles or ATVs).  That is also the conclusion reached by a majority of respondents to the city's 2016 survey, and the April 2018 survey (see link below).

Signs were placed on the Perimeter Trail that confirmed the decision of Council that the Perimeter Trail was to be non-motorized. However, they were quickly removed, and when ATWA asked administration about this we were told that there had been a “miscommunication” on the part of Parks crew members. New signs indicate that the trail is open to snowmobile use. Lack of proper process has once again resulted in confusion, conflict, and needless cost ($’s).

At the June 12, 2017 City Council meeting, Council passed a motion stating that the Whistle Bend paved perimeter trail be designated as non-motorized.

Active Trails Whitehorse Association applauds Council's decision, which is on par with the wishes of the majority of residents, as per the survey results mentioned below.  This decision also supports the position of the Trail Task Force which recommended a non-motorized perimeter trail, as mentioned in its May 8, 2017 report.
(See May 8 report at this link, page 16 to 24:  http://www.whitehorse.ca/Home/ShowDocument?id=8364 )

The perimetre trail controversy arose when the Whitehorse Trail and Greenways Committee (WTGC) recommended on May 18, 2017 that the perimeter trail be designated as motorized, thus overruling the May 8 Trail Task Force recommendation for a non-motorized designation.

Several Whistle Bend residents presented to Council in May 2017, and they made it very clear that the perimeter trail is heavily used by pedestrians, and a non-motorized (summer and winter) designation is more suitable, safer, and environmentally friendly.

For more information on the June 12 City Council debate, please refer to the City's June 12 minutes at this link:
http://whitehorse.ca/Home/ShowDocument?id=8910

At a May 29, 2017 City Council meeting, administration presented its recommendations on the “Trail Plan Implementation – Porter Creek/Whistle Bend/Takhini Areas”.

There is some controversy with regard to the paved perimeter trail in Whistle Bend.

The majority of residents prefer a non-motorized perimeter trail, as per results for 2016 survey of Whistle Bend trail planning (see page 21 at the above link):
​
“Survey respondents were also asked to weigh in on the matter of the designation of the paved perimeter trail in Whistle Bend. Options provided (and responses) were as follows:
• Non-motorized year-round (54% agree, 23% oppose, 23% neutral)
• Motorized winter only (34% agree, 40% oppose, 24% neutral)
• Motorized year-round (24% agree, 48% oppose, 27% neutral)”

Furthermore, the Porter Creek/Whistle Bend/Takhini Task Force recommended a non-motorized designation for this perimeter trail.  See pages 22 & 23 at the above link.

However, at the May 29 City Council meeting, administration recommended a motorized designation for the perimeter trail, based on the recommendation of the Whitehorse Trail and Greenways Committee.

For more information on the May 29 Council meeting, see a May 30, 2017 Whitehorse Star article entitled “Use of Whistle Bend trail surfaces at council” at this link:
http://whitehorsestar.com/News/use-of-whistle-bend-trail-surfaces-at-council

Council will be voting on this issue on June 12, 2017.  Residents may provide input to City Council by sending an email to mayorandcouncil@whitehorse.ca prior to Council’s vote.

As he pointed out, these phases of Whistle Bend will house thousands of residents – with 855 lots planned for 120 hectares – and while a paved trail through the neighbourhood is planned, people will want other connections.

Officials acknowledged the high density of the neighbourhood. They noted it will put double the population of Riverdale into a subdivision that’s about the same size as Riverdale.

The Whistle Bend neighbourhood is designed to promote more active modes of transportation, such as walking, cycling and others.
Long, however, questioned what trail connections will be in place for residents wanting to get from Whistle Bend to other areas of the community.

Ultimately, Long would like to see a connection of trails which would link the community and travel along the Yukon River where possible.  “How ’bout getting across to McIntyre Creek?” he asked as an example, before wondering about those wanting to get to Yukon College as another example.

Long argued that some areas in town – such as Copper Ridge – are not as suited to walking as they could be because that wasn’t considered when the area was planned.  “There’s a real opportunity here,” he said.  He stressed the need to work on those issues now rather than coming up with a plan for trails years after residents have moved in.  …”