July 2015  The City added barriers on the side of the trail leading up to Pee Wee Hill to prevent motorized trespassing on this trail. Pee Wee Hill was formally designated non-motorized by City Council in Jan 2014. 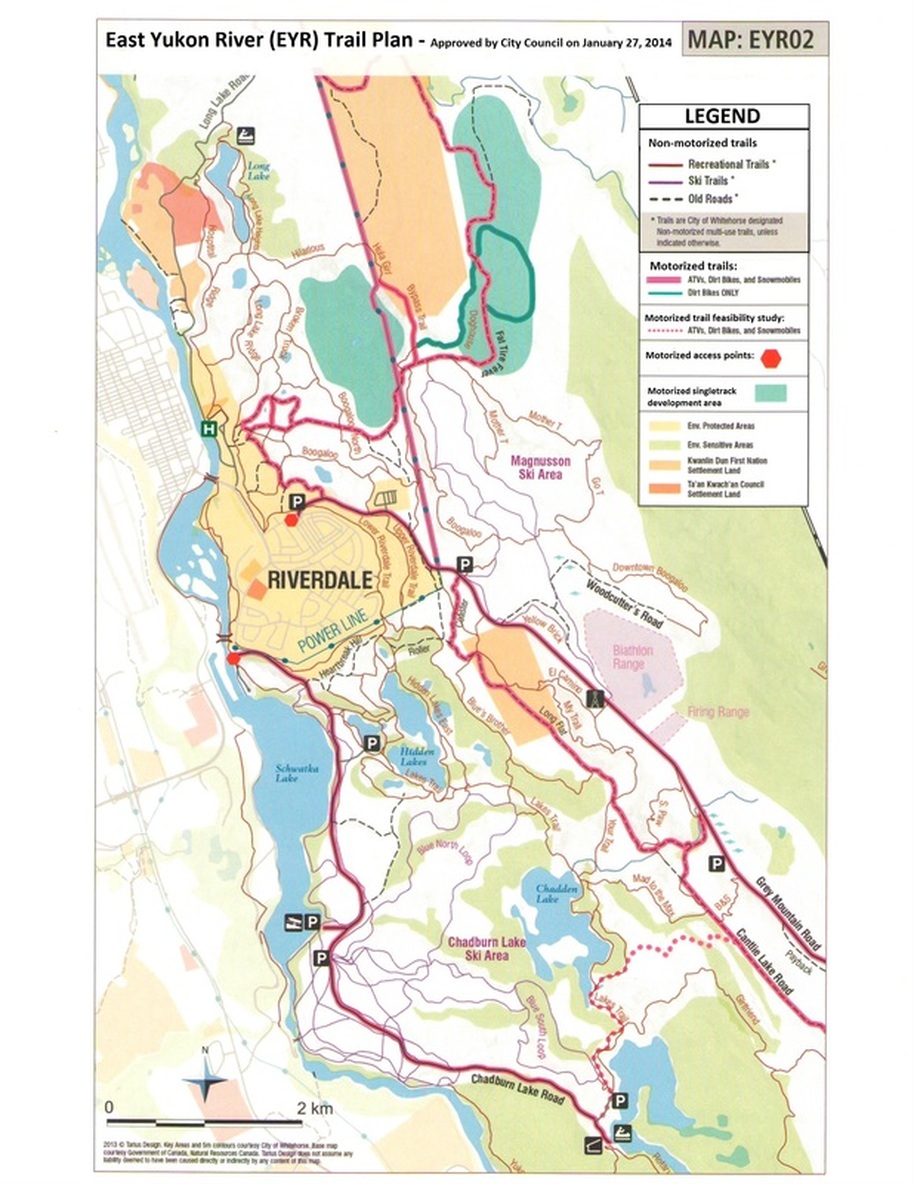 Spring 2015 update:
The City is still working on the preparation of a more detailed city-wide map of motorized trails that include the EYR Trail Plan.
Its most recent effort can be found at http://www.whitehorse.ca/home/showdocument?id=4210
Or, just go to the latest ATV Trail Map on the City's website.

January 2014 update - New trail designation for Riverdale: what does it look like?
Trail designation for the Riverdale area, namely the East Yukon River (EYR) trail network, was finalized and approved by City Council on January 27, 2014.   Click the icon below to view the approved EYR Trail Plan, to city limits.

Download File
Operators of snowmobiles and ATVs are encouraged to keep their machines on the designated motorized trails shown on the above map.  This will help to protect our environment.

The EYR trail designation had to be planned around the City’s Snowmobile and ATV Bylaws, which allow these off-road-vehicles (ORVs) to use City streets only to access designated motorized trails.  ORVs are prohibited from downtown, Robert Campbell Bridge, Hospital Road, the portion of Lewes Boulevard between the bridge and Alsek, and the Millennium Trail.  Snowmobiles are prohibited from sensitive areas, and ATVs (including motorbikes) must stay on designated motorized multi-use trails.

The final EYR map designates as non-motorized all trails in Riverdale, including Lower Powerline.  The much debated Pee Wee Hill and Hidden Lakes areas will remain non-motorized, as they include extensive Environmentally Sensitive Areas.  Those areas are prohibited to snowmobiles.  A non-motorized Pee Wee Hill was also deemed safer for all users of this extremely popular area.

There are two routes for ORVs to exit Riverdale:  Grey Mountain Road and Chadburn Lake Road.

Active Trails Whitehorse Association (ATWA) was involved from the beginning of this process and participated in the 2012 EYR Task Force.   It soon became clear to us that the composition of this task force overly represented pro-motorized interests in a ratio that did not reflect the actual residents' and trail users' ratio, and that some important guidelines from various city plans were ignored.

The outcome of the 2012 EYR task force was a December 2012 EYR map that was proposing a multitude of motorized trails, to which ATWA ,as well as many residents, strongly objected. City Council requested further consultation.  A subsequent September 2013 EYR trail survey resulted in the majority of respondents opposing the December 2012 EYR proposal.  (see below)

ATWA is grateful that City Council listened to the voice of residents, and requested from administration a more balanced plan.  The modified November 2013 proposed plan was based on the September 2013 survey’s results, and was a major improvement over the previous proposal. We heard that the final map (shown above) was acceptable to most, but that the process had been too prolonged.
​
To spare city resources and unnecessary contention, ATWA would like to see future trail planning based more closely on the City’s guidelines for trail designation and environmental protection, as well as task force composition that better represents residents.
“I have little confidence in sufficient bylaw resources being allocated to monitor proposed motorized use (it hasn’t happened to date) & the proposal as is stands will just encourage more use, leading to more off trail use resulting in further degradation.  Let’s keep the wilderness in our wilderness city!! “ (Page 6)

“The area within the Hidden Lakes being studied for MMU (i.e. motorized use) is out of the question.  The slopes of the hidden Lakes are delicate and easily eroded.  Noisy vehicles should be prohibited here.  The quiet peace that most of us seek in this area would be ruined.”  (page 9)

“Without enforcement, allowing Motorized vehicles on some trails means that many ATV and dirt bike riders will likely use all trails.  Also even the proposed MMU trails are very popular routes for residents walking dogs or cycling with small children, and there have been regular instances where careless riding and high speeds create dangerous or at the very least very stressful situations.  My recommendation would be less MMUSs overall - and a plan and budget for the enforcement of the new designations.” (page 10)

“The plan needs a reasoned approach to “out and away” trails and this is not it yet.” (page 11)

“… I am concerned of the noise and pollution that comes from more use of motorized vehicles in places that my family and I go to find peace and wilderness.” (page 13)

“I have seen running trails with trees pushed down for ATV access.  That running trail now sees ATV’s on a regular basis.” (page 18)

“For goodness sake the city needs to stop wasting money on committees and just use some common sense!  Restricted access to Hidden Lakes, primarily by making the Peewee Hill trail and the Roller Coaster trail non-motorized, is only going to benefit the city.” (page 30)

Excerpts from City plans below.  The full documents are available on the City's website:  www.whitehorse.ca

“Motorized recreational vehicles (ATVs, snowmobiles) were identified as a major point of contention in the community. Many feel disturbed by motorized activity and identify it as a safety issue, particularly in regards to children. The consensus seems to be that laws regarding these vehicles are not being respected and must be more stringently enforced.”

“Furthermore, trails need to be strongly designated as motorized or non-motorized. Many also expressed concern regarding the erosion of trails, and general environmental damage caused by these vehicles.”

“Many residents of Whitehorse enjoy motorized recreation, such as ATVs and snow machines.  However, not all residents appreciate motorized vehicles on local walking and skiing trails.  To avoid conflict between motorized and non-motorized trail users, the City Parks & Recreation Master Plan and Trail Plan recommend the idea of “out and away” trails.  These trails would be designated for motorized use, allowing those residents routes to get away from the local green space and into the larger hinterland, where they will not be a nuisance to non-motorized users.”

18.5.2  The trail Plan recommends the creation of a map of “out and away” trails for motorized recreation vehicle usage.  This map shall be designed to strongly discourage the use of all terrain vehicles on non-motorized trails and in environmentally sensitive areas.”

Before getting down to the detail of individual trail designation, it is important to view the entire trail system conceptuallyas a series of nested connections.

First, there is a need to connect people to places within their neighbourhoods …

Second, there is a need to connect neighbourhoods to each other and to facilities which serve more than one neighbourhood, such as schools. …

Third, there is a need to interconnect the various City parts as a whole. … by making such alternatives easy and time effective, further encourages healthy lifestyles.

Lastly, there is a need for escape routes, trails which allow residents to leave the limits of the City entirely. These are the “getting the heck out of Dodge” trails which facilitate escape from urban form and connect the City to a broader network of trails and destinations beyond its boundaries. It is particularly important that motorized users have appropriate urban/rural interface routes which allow them the opportunity to recreate at distance from built-up areas.

“Neighbourhood Trails -  majority of trails within a designated distance from established or new neighbourhoods; maximum 500 m distance dictated by geography, trail conditions – trails one might use on an evening ½ hour dog walk.”

“Hinterland trails – trails beyond the designated distance from neighborhoods, usually non-motorized but may accommodate minor motorized use.”

“Trails to be Abandoned – trails and trail sections to be decommissioned & reclaimed or rerouted for safety, habitat protection or other reasons.”